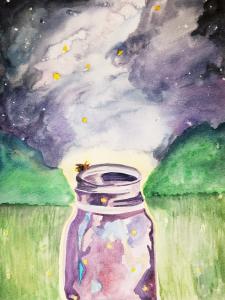 Hello Kings! Today I am writing to you about something that is so important to your spiritual health. I'm just going to dive right in, and keep this short and sweet and hopefully to the point.
Why do I say "Hello King"? It's because of what God tells us way back in the beginning of the Bible. In Genesis 1:26 it says " And God said, Let us make man in our image, after our likeness: and let them have dominion over the fish of the sea, and over the fowl of the air, and over the cattle, and over all the earth, and over every creeping thing that creepeth upon the earth." We are made in God's image, and that is the image of a king. We are given dominion over all the things in the earth. A king can't rule in the territory of another king, by default he would lose his authority to the higher power. So God created Earth and placed man here to rule it as his territory. God rules in Heaven, we rule here. Based on that, if you think believing in Jesus, being a Christian, means that when you die, you get to finally be a king when you get to Heaven, sorry but that's just not true. When you go to Heaven, you lose your authority because you've now entered God's territory, where he is ultimate ruler and Lord.
So what does this mean? It means we were DESIGNED to rule and reign right here on earth, right now as we are living. Each of our lives was designed with a purpose to impact our own world. Not for our glory, but for God's. Even though he has created this territory for us, and placed us here with full authority, He has technically sent us as Ambassadors from His Kingdom. This means we must represent his laws and mandates here in our territory. It must look just like the Kingdom according to the Lord's Prayer in Matthew 6:10 which says, "your kingdom come, on earth as it is in Heaven." The laws are written in the eternal Word, and no matter what growing up in a democracy has taught you, you cannot change or debate that law. What the king said, goes.
There is so much to unpack about this one verse in the Bible (Genesis 1:26) and all that it implies. But today I just want to focus on the basic outline of truths it represents. If you're familiar with the fall of man, you know that Adam sinned and brought us all into the curse. God didn't destroy mankind because of what Adam did, but we were disconnected from Him because of it. God is holy and this had to happen because God cannot change. He couldn't change His holiness to reconnect with us. So He designed the plan of redemption for us through Jesus. When Jesus resurrected, we got our relationship back. We regained our status as Royalty through the blood of Jesus.
As a believer, you need to recognize your royalty. Don't let religion or the devil's condemnation make you think that you were designed to be subject to the devastation of this world. In every experience of pain, loss, defeat, lack, God has designed a way out for you. He has written tools for triumph. It's all housed in His Word. In the written Word, in our relationship with Jesus, and in the partnership we have with the Holy Spirit. If you hear this message today and know that you are designed as royalty with Christ but don't fully understand what that means, comment below and I will pray for you. I'll ask the Holy Spirit to reveal the mysteries to you. You can also subscribe and follow my channel to learn more about this revelation. I am a member of a local church called House of Jubilee Ministries. It is located in Euclid, Ohio. If you ever wish to join me, please reach out! We teach Kingdom principles every Sunday at 11:30 am. There is also a facebook page for my church where we post videos during each sermon. I'll put the link in the description below.
I want to thank you for reading. I've linked the video if you want to see me painting more fireflies in a jar and hear this message. I hope you have a great rest of your day!

Watercolor Wednesdays- The Word of a King 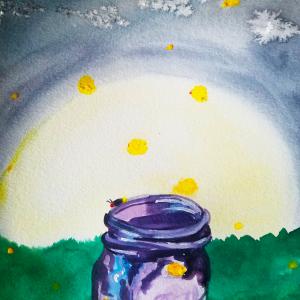 Watercolor Wednesdays- The Word of a King 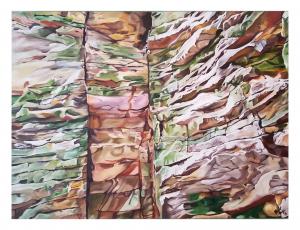 I am excited to announce that two of my paintings have been accepted in the Gallery Show for Valley Art Center titled "Observation Conservation" Art that explored the beauty of nature, threats facing our world and demonstrates how to protect and conserve our natural ecosystems.
The show opens tomorrow night, Friday March 29th, 2019 from 6-8pm. And will remain on display until May 8th, 2019. If you are around the Chagrin Falls, OH area, please make plans to stop in! The Valley Art Center is open Mondays - Fridays 10am-4pm, and Saturdays 10am-2pm.

My paintings are inspired by my personal exploration of nature locally and around the world. I make it a point to take time and soak in my surroundings, whether on a hike or a camping trip. There are more than 30 artists featured at this show, so it is definitely worth your time to stop by! All artwork is available for purchase.

Thanks for reading,
Brittany (Bert)